Jeffrey Steele, Just Being Himself 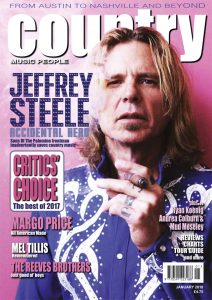 Sons of the Palomino is the sound of Los Angeles country in the Eighties, in practice and in spirit. The debut LP from the band of the same name, the record was the brainchild of veteran songwriter Jeffrey Steele, who’d cut his teeth as a country musician 30 years ago at Hollywood’s famed Palomino club. Looking to rekindle the barroom basics of those two-stepping toe-tappers, Steele enlisted the help of a murderer’s row of studio players who’d cut the classic West Coast records of the day. The results were so good that names like Vince Gill, Emmylou Harris and Jamey Johnson insisted on getting involved, but star power isn’t the selling point of songs like “Runnin’ Around” or “Countryholic” – it’s an inside-out understanding of what makes a clever hook and rock-solid shuffle feel so timeless. J.G.

The first time Jeffrey Steele heard country music in person was at the Palomino Club in North Hollywood. His father would take Steele, then about 9 years old, to the weekly Palomino Talent Show, where he saw legends like Waylon Jennings, Johnny Cash and Buck Owens play to crowds of a few hundred people. Years later, Steele, who today is a Nashville Songwriting Hall of Famer, got his start playing country music in the Palomino’s house band.

“Songwriting veteran Jeffrey Steele is among the performers who, early in his career, graced the stage of the Palomino Club, the legendary North Hollywood venue that was a haven for country fans for decades. In a nod to the club, which helped launch Dwight Yoakam into superstardom, Steele now fronts Sons of the Palomino, a band that includes veteran musicians Paul Franklin (steel guitar), Larry Franklin (fiddle), Jerry Roe (drums), Tony Harrell (piano), James Mitchell (guitar) and Brad Albin (bass). The group’s new single and video for “Countryholic” is a potent mix of old-school honky-tonk, sparkling with clever, rapid-fire wordplay (with crafty shout-outs to Merle Haggard and Hank Williams) and a guest shot from John Rich.”

“Raise ‘Em Up Nominated” for Song of the Year

Thursday, Cam, Little Big Town, Keith Urban and Eric Church, Eric Paslay and Chris Stapleton earned nominations for Song of the Year. The trophy in that category goes to the songwriters, publishers and artists….

“Meanwhile Back at Mama’s” Nominated for CMT Music Award

The awards will air on June 10 at 7 p.m. on CMT. Fans can vote for all their favorite artists at CMT.com through Monday, June 8 at 10 a.m. ET.
For the full list of nominations visit MusicRow.

Keith Urban’s “Raise ‘Em Up (featuring Eric Church)” predictably reaches the #1 position on this week’s Mediabase country radio singles chart. Up one place this week, “Raise ‘Em Up” usurps the throne from Dierks Bentley’s “Say You Do.” The track, which spent one week atop the Mediabase listing, sinks to #6 on this week’s chart. Read more here

Jeffrey Steele & Darrell Franklin: Off To Join The 3 Ring Circus

Jeffrey Steele’s 3 Ring Circus purchased a house in trendy Melrose about 12 years ago. Today the area is booming with activity and so is 3 Ring Circus. Darrell Franklin joined the company at the end of 2013 and now serves as GM…

“When I first arrived there was such a smallness and camaraderie to Nashville publishing,” says Steele. “Walking over to Patrick Joseph Music in the early ’90s I’d find an old, cool house full of songwriters plotting to change the world. And there were publishers like Pat Higdon, David Conrad and Jody Williams that really knew how to pick songs apart and give criticism that could push you up instead of knock you down. So the basic 3 Ring premise is let’s build this in the way we remembered was so much fun and created such successful companies. We aren’t chasing what’s out there, we’re telling our writers, “Man it’s your generation, your time. Find what it is you need to say.” I had my moment, now I want to help develop these younger writers in the same way the older guys taught us…” Read more here.