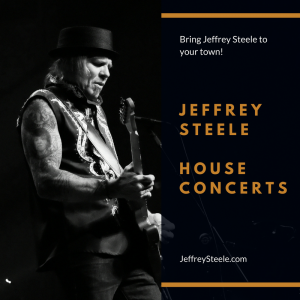 BRING JEFFREY STEELE TO YOUR TOWN!

Want to bring Hall of Fame Songwriter JEFFREY STEELE to your house for a show?

Jeffrey is currently booking house concerts. Please fill out the form to HERE and check out our FAQ for more info!

Among his many accolades over the past few years, Jeffrey Steele has been named to the Nashville Songwriter’s Hall of Fame, honored by the Country Music Hall of Fame as a Poet and Prophet, twice awarded BMI Songwriter of the Year and thrice the Nashville Songwriters Association International (NSAI) Songwriter of the Year. CMA has twice awarded him the coveted “Triple Play Award” for three No. 1 songs in a year. His country and A/C mega-hits include a string of chart toppers including: “Raise ‘Em Up”, “Knee Deep”, “Here,” “My Wish,” “The Cowboy In Me,” “These Days”, “My Town”, “Something to be Proud of”, “Everyday” and the groundbreaking “What Hurts The Most,” nominated for Best Country Song at the Grammy Awards.

Additionally, he has won over 35 BMI Country and Pop awards, was nominated for a Golden Globe and Critic’s Choice Award for Best Original Song “I Thought I Lost You” for the Disney/Pixar animated feature BOLT, performed by Miley Cyrus and John Travolta, been named one of Billboard Magazine’s top 5 writer’s 8 years in a row, as well as Music Row Magazine’s Songwriter of the Year Award. Steele’s latest album features performances with Vince Gill, Emmylou Harris, Jamey Johnson, John Rich and others.